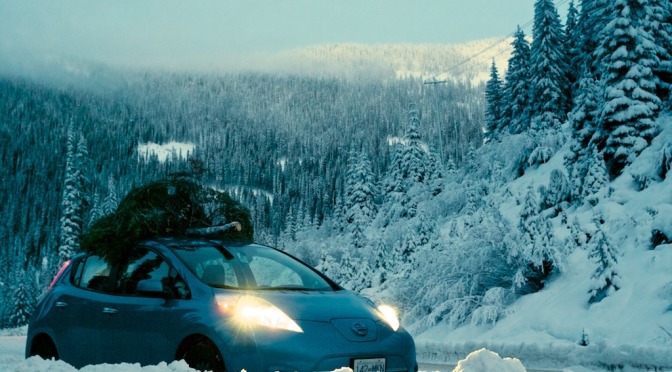 For a video update on winter driving, go to the bottom… (original post follows)

Ski season started recently in the Kootenays!    I love skiing so this is one of my favourite times of the year.  There are a few ski hills close to Nelson, so in the fall I plugged the data into my spreadsheet model to see which trips were viable:

We were trying to decide whether we should buy a “Powder Plus” card at Whitewater (close to Nelson) and go skiing at some of the other hills, or just buy a season’s pass.  Salmo has a small community ski-hill which has cheap lift tickets, but the hill is pretty low in elevation and the model showed the trip to be pretty much out of reach (unless I could plug in at the day lodge, I didn’t ask).

Rossland has Red Resort, but the passes are quite a bit more expensive.  The town does run a free shuttle bus from downtown up to the ski hill though, so it would be feasible for us to drive there, plug the car in one block away, and catch the bus to the hill for the day.

In the end we decided to buy a pass to Whitewater.  We also rented a ski locker to save on packing our skis up/downstairs in our home every weekend, so unfortunately I won’t get any data to compare the effects of a roof-rack.  However, we tend to ski almost every weekend, and without the rack on the car, this will yield lots of data over the winter that could be compared to other trips we do.

It is also up a significant hill – the base lodge is just over 1,000 m higher than our house by Kootenay Lake!

The skiing was ok for early December.  For the most part we were just excited to learn more about our new hill (we just moved to Nelson in the spring of 2014).  Our previous hill only had a t-bar, so the chairlift was a fun experience for both boys.  Cedric in particular was having a very fun time and didn’t want to go into the lodge very often.

We had brought a saw, clippers, foam pads, and our canoe straps with us with the idea that we would get a Christmas tree on our way back from the ski hill.  Historically we have made done an afternoon adventure and spent some time picking our tree – we decided to combine two trips in one for this weekend.

We love fir trees for their wonderful smell, so had some idea of where we wanted to get the tree (and I did check to make sure we got the tree from public land, and not a park or someone’s property!)  On the way up the road in the daylight we checked for likely trees, with the idea that on the way out, we would stop somewhere nice and all get out and pick one.

After a day of skiing though, we were pretty knackered, so we just pulled out somewhere safe, I poked my head over the snowbank, found a likely candidate a few hundred feet off the road and cut it down.  In a bit of an oops moment, I picked a tree on the downhill side of the road though, so I had to drag it back up a relatively steep slope, doh!

So how did my model fare in comparison to real data?  Fairly well as it turns out – I estimated 9.4 kWh from the model (see above table) and actually used about 9.3 kWh (see below table).  Mind you this is only one data point, so I’ll collect a few more months of data and see how it turns out in the end.

I did notice the same phenomenon with energy efficiency that I observed on our trip up to Kokanee Glacier – if you reset the efficiency meter at the top of a hill and then regenerate more energy than you use on the way down, the meter is no longer accurate (it overestimates energy used).  Over the next few weekends I will not reset the meter at the top and report back – hopefully the meter will behave better and show the same efficiency as I calculate with my spreadsheet.

The coolest part of the trip in my view?  The fact that we were able to drive home in comfort essentially for free!  In our gasmobile, we would have used just as much more gas on the way up the hill as we used electricity (on a % basis), but it would still use gas on the way back down to town.  A regular hybrid wouldn’t do much better, because the battery is so small you would fill it up quickly.

The future is electric!

This winter (2015/2016), I filmed the drive to/from Whitewater, with some running commentary on things I have noticed about driving in the winter with an electric car.

5 thoughts on “Skiing and a Christmas Tree”