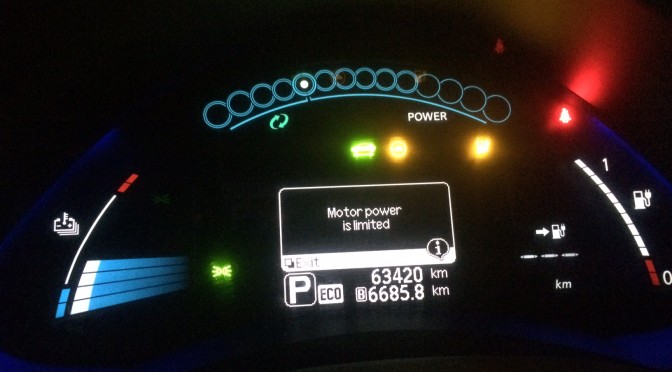 I’ve now covered over 64,000 km in our electric vehicle (EV), a 2014 Nissan Leaf.  The cover image for this blog post shows that I finally “turtled” the car (on purpose!) this month (December 2015) – another blog post in the near future will explain why I was doing this!  (Turtling the car means you go into reduced power mode and have less than 1 km to drive, the car continually limits your power to force you to pull off to the side of the road safely – this protects the battery from discharging too far.)

We have owned it since May of 2014, and it was manufactured in February of 2014, so it is just shy of 2 years old.  Gas prices have stayed above a dollar in BC this past year (2015), despite the price of oil steadily declining.  I expect that trend to continue as the fuel has more tax added to it, and the cost to refine “poor quality” oil continues to mount (after all, we are scraping the bottom of the barrel now, not much of the light sweet crude left!)  Electricity price has been much more stable during this same time period, and the grid continues to get “cleaner” with additional renewable energy added daily!

Some key values:  I saved almost $4,000 in fuel (compared to a similar petrol vehicle), I didn’t emit over 7,000 kg of GHG, and 3,000 L of fuel was able to stay in the ground (along with all of the associated impacts of refining, burning, etc).

I’ve included the same table and chart below as in previous cost updates (here, here, and here).

A couple of random tidbits:

Unfortunately the funding for the Clean Energy Vehicles for BC program is almost out of funding again (see an earlier post here for more).  Having said that, it isn’t all bad news, as that means somewhere in the vicinity of >1,200 EV and plug-in electric vehicles (PHEV) have been added to our roads in only one year!  Off-hand, I think that doubles the amount of EV/PHEVs that were purchased from 2011 through 2014!

The government may need some encouragement to keep the program going, so please write to your MLA, the Minister of Energy and Mines, and our Premier.

Learned something about the key fob after ski touring in -10C the other day… don’t ignore the “low battery” warning on your dash!

Just before we left for skiing that morning, the dash had shown me a sort of cryptic message about my fob battery (the image showed it with about 1/2 a battery). I ignored it, and we headed out for a nice ski in the dry snow.

Arriving back at the car after dusk (and no one else left in the parking area, and no cell service), I pushed the button on the rear of the car to open the hatch and nothing happened! Getting a bit alarmed, I tried the driver door button, still nothing… with a sinking heart, I realized that the battery must have died in the cold. I opened the car with the hidden valet key, and started trying to warm the fob in my hand.

I kept waving putting my foot on the brake pedal and pushing the “Power” button to try to start the car… after a few minutes, I must have inadvertently waved the fob near to the Power button, because a cryptic pictogram appeared on the dash – it seemed to show the fob aiming at a big stylized push button.

After a few goes of bringing the fob closer and closer to the button, trying each end, I finally pushed the button with the narrow end (away from the key ring), this time it worked and the car started!

Despite looking like magnets, apparently they are coils of wire that allow the car to inductively power up the fob to receive the correct security ID/code (thanks to Thomas on the ever helpful Canada Nissan Leaf Facebook group for that info!)  Good to know you won’t ever be stranded in the event of a dead fob battery!

Over the first 18 months of owning the car, I tried tracking battery degradation using information available from the regular car information screens.

I was trying to infer the capacity by dividing the energy consumed by the difference in state of charge that I recorded.  Due to vagaries in both the way the Leaf tabulates energy efficiency, and how hard it is to generate a truly accurate “% battery” value… my efforts were in vain.

For those new to EVs, you may even be wondering what the heck I am talking about!?  Battery degradation is a normal thing for anything powered by a battery.  It simply means that over the life of the battery, it will be able to store less energy over time.  There are many factors that go into the degradation (calendar life, temperature [mainly heat],  cycles, depth-of-discharge, conjunction of the planets [ok maybe not the last one]).  Since people who buy a car expect it to have a good long life, the car and battery companies have generally put in pretty solid efforts to protect the battery from degradation as much as possible.  Unfortunately, early Leafs (mainly those in very hot climates, like Arizona) did suffer from accelerated degradation.  The Leaf does not have active cooling for the battery, unlike most other EVs on sale today.  Nissan has claimed they did this for simplicity and longevity (i.e. less parts to fail without a coolant circuit), but in some cases that idea has not worked out well.

Ok, so back to my specific case – what was I expecting for degradation?  I really wasn’t sure.  On one hand, there were people reporting 20% of battery loss within 2 years and only 45,000 km, and on the other, some were reporting 5% loss after the same amount of time and even more kilometres.  Climate seemed to have a lot to do with it, and it does get pretty hot in the parking lot in Trail that I park my car during the day.

As noted above, I wasn’t able to track degradation using the car gauges.  I finally broke down and bought a device that plugs into the car’s computer and can transmit certain data to an app on my iPhone.  I’ve been looking at this screen periodically since November, and am pretty confident that I’ve lost no more than 5% of my battery capacity after all of this time and kilometres!

At this rate, I should be able to do my commute for my original plan of 5 years on the battery without any issues, maybe even longer, before I need to replace it.  By that time, I fully expect there to be a larger capacity battery available for purchase (after all, the 2016 Leaf is exactly the same as my car, but with a 30 kWh battery).

Nissan just has to choose to offer it!