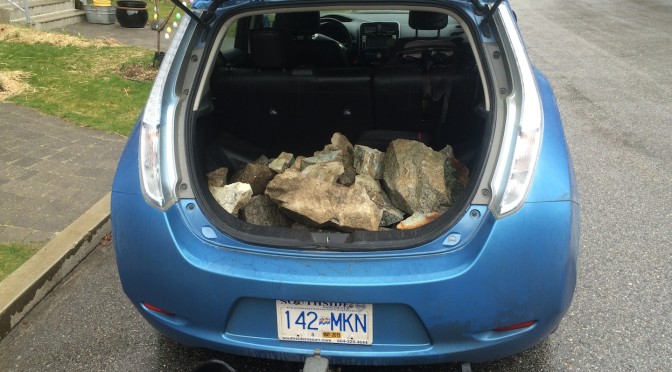 On the Easter weekend of 2015 we were able to experience our first “Kootenay Trifecta”; one of the many reasons we decided to move here was the possibility of gardening in the same weekend as skiing.

After a busy road-trip to northern BC (sadly not with the electric car, since the infrastructure has too many gaps) over the preceding two weeks, we noticed that spring had been busy while we were gone and our daffodils that had sprouted in early March were now in full bloom the first weekend of April.  We got busy with planting seeds on indoor flats and pulling the straw mulch off our beds to help warm up the soil.  I had been thinking about an unfinished project from 2014 as well – a small retaining wall in the backyard to turn a steep (but short!) slope into a few terraces in which we could plant some raspberries and such.  Last year I had used the material at hand, which was large sub-rounded cobbles… well it doesn’t stack all that well, so some “after-work” rock sleuthing had turned up a possible source of material only a few kilometres from our house in a ditchline.

How to get the material home though?  The Nissan Leaf of course!  This car can really do (light) double duty – I pick up small loads of lumber regularly and thought that granite wasn’t really much different.  So off to the ditch line I went and loaded up the rear hatch of the car, and I added some to the footwells too!  Keeping a careful eye on the level of the rear car, I decided since the electricity to get here was so minimal I would just do several trips.

After a day of fun work around the house, we decided to kick back and relax the final two days.  Day 2 brought a field trip to Castlegar.  Marley was on a mission to spot some glacier lilies, so we did some reading on their preferred habitat and searched for likely local trails that we thought would have some – the hike we chose looked pretty short, so we loaded all of the bikes on the back of the car as well and headed out.

Dove Hill delivered with a number of sightings of early spring wildflowers in bloom, but we were not finding any glacier lilies!  We arrived at the top and just as we were sitting down to rest on the bench, I spotted a single flower lying under the shelter of a nearby shrub – once we knew where to look we were finding many little patches of them.  It was pretty funny because we were expecting to find them in a more moist area and did not, and here we were on the top of a sun-baked and wind-exposed rock with only patches of soil and vegetation and we found them!

We then headed back down to the car and down from the bench we were on to the lower bench just above the confluence of the Kootenay and Columbia rivers at Selkirk College.  We had not ridden here before, so we were pretty excited to find ribbons of singletrack eminently suitable for our kids to ride.  Rounding a corner in the trail along the Columbia River we came across a gravelly meadow of glacier lilies!  Highlight of the day I think.  Not long after that, the trail forked, we decided to stay along the river rather than climb back up to the bench near the confluence of the two rivers – that was a mistake with two kids on bikes.  The trail turned quite cobbly and became a hike-a-bike event.  All was not lost though – since the trail took a little longer to complete and the kids had generally been good sports about it, we decided to treat them to pizza on the way home at the Kootenay Smokehouse in Crescent Valley (if you haven’t yet been, get over there now!)  As we went inside, I noticed a 120V plug right by the front door, and since we were a bit lower on charge than I had expected for the trip to Castlegar and back (likely due to the extra drag of 4 bikes on the back, using the heater in the evening, and that the parking lot for Dove Hill was up a bigger hill than I thought), I asked if we could plug in while we ate dinner – the server expressed some momentary surprise, then came outside with me to see what I was asking about.  The plug by the door may have posed a safety hazard, but she did direct me to a plug near a side building from which I happily gained 5% of battery while we ate (or about 1 kWh, $0.09 worth).

For the last day, we headed from spring back into full-fledged winter to enjoy some final powdery turns up at Whitewater.  We did this trip well over 20 times this season with the Leaf (read an early season trip report here) and had no issues or surprises.  We brought the skis up at the beginning of the year inside the car (yay hatchbacks!), left them in a locker all year, and brought them down the same way at the end.

Even at the end of the season with the parking lot turning into a full-on mud bog, we were able to get around with a bit of careful driving thanks to the generous ground clearance on the Leaf (a Volt would likely have scraped!)  Anyone reading this blog from the Kootenays and considering a Tesla Model S should ensure they get the air suspension package so they can raise the car in deep snow etc.

I’ve pasted the stats from days 2 and 3 below; you can see that we used most of the battery on our trip to Castlegar.  A few chargers in Castlegar, and a few more at Crescent Valley (perhaps at local businesses that have customers there for an hour or more at a time, like the cat-skiing operation or Kootenay Smokehouse) would be fantastic.

The trip to Whitewater and back is no problem for a Leaf and likely most (if not all) of the current electric vehicles could do the trip just as well.  Plug-in hybrids would probably be able to do most of the journey on electricity as well.  I did think about the WW shuttle vans during the winter – when the Via Motors conversion kit (or something like it) becomes commonplace, those 14 passenger vans would be a great choice to convert!

The Leaf really does well as a local runabout car and can do most anything that the Kootenay lifestyle tends to throw at you!